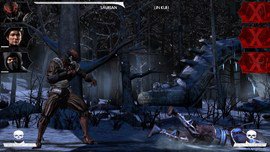 iPhone users would more commonly opt to fill their phones with diverse applications that are more specifically geared to what they love to do but although this is the case, some may not really feel as though it's something geared for gaming. What you'll be able to see in the current trend, however, is that iPhone is as good for gaming as any other exquisite phones out there and with a bit of sacrifice in the form of your storage, you can get superb fighting video games that you'll surely enjoy. You may be thinking though, why should you opt for the best fighting games for iPhone?

When it comes to different genres of games, the arcade fighting games is certainly one of the pioneers of the video game industry. Fighting has always been incredibly competitive and it has been incorporated on games through diverse ways since the generation where Arcades ruled throughout the globe. With this in mind, it is easy to see that any avid game who owns an iPhone device should certainly consider opting for the best fighting games for iPhone. Searching throughout the internet can turn out to be a hassle for some people out there and if you want to kick-off your search in the most perfect way possible, here are some games that you'll be happy to include in your must-play games.

The Mortal Kombat fighting game has become one of the best arcade fighting games ever since its conception in the gaming industry. It has witnessed and even experienced the growth of the gaming industry itself and in our current generation, the Mortal Kombat X is by far one of the best and the latest instalment on this gaming title. You'll surely feel completely absorbed when you start the game and play against computer opponents. Not to mention, you'll feel nostalgic at the same time as well, since you'll be seeing familiar faces from Raiden, Scorpion, Sub-Zero, Shao Kahn, and other classic characters and beyond from Mortal Kombat. Although it would cost you 2GB of memory space, you'll get one of the best fighting games for iPhone that's packed with graphics and gameplay that's comparable to its console version. 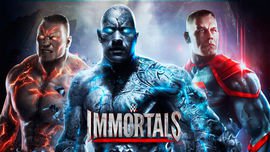 If you're a fan of the DC Universe, then you'd probably pick the revered Injustice 2 over any other best IOS fighting games out there. The Injustice 2 is only one of the titles that have tackled the usage of the DC Universe and its iconic characters but out of all those who have utilized this Universe, only this specific title has emerged to the top of the industry and become incredibly renowned today. It's easily one of the best fighting games across diverse platforms and you'll surely feel that the gameplay of the Mortal Kombat is highly similar to this one. In fact, even the memory they take up are almost the same. Still, you'll get another marvellous game right into your collection which is certainly more than worth it.

The epitome of fighting games are definitely sports games that are based on Fighting. Out of all that you could think of, one of the most fun and exciting is certainly playing as a wrestler in the WWE. There have already been many games which have utilized WWE and without a doubt, they have been extremely successful. This just showcases just how big of a platform and brand WWE has become and if you're a fan as well, there's no better way for you to experience its grandeur, other than installing this game on your iPhone device and experiencing its topnotch environment and gameplay. Smash your way to the championship, wreak havoc across the stage and unleash special moves that will make you feel more immersed to the game than ever.

If you ask people what they think is one of the most brutally satisfying and literally brutal sports today, many would surely tell you that it's UFC. This sports which allow participants to battle it out with mixed martial arts provides a more diversified gaming experience that will leave anyone at the edge of their seats throughout matches and the overall game. It is simply that exciting and breathtaking. Being able to play this game on a mobile device is a dream come true for many and if this is the case for you as well, you can play the game by installing it on your iPhone as well.

The aforementioned games here may not be the be-all and end-all of the best fighting games for iPhone or the best IOS fighting games but, they are more than enough to completely convince you and let you see the beauty of installing this kind of games on your device.